This is where it all started…

This video is from the time at LEGO (1995 to 1998) and shows work Dan and I were involved in during this time. It documents what was happening in respect to human interaction in 3D space at LEGO and goes all the way to real time movie making with digital LEGO. It visualizes the vision we carry when we create a product like Xaelander for Motion4U.

The very first bit of the video shows an early prototype that was realized in collaboration with David Small which was at MIT at this point. As soon as the gentlemen in the yellow suit pops up you’re looking at Scott from Multigen that uses SmartScene. In the second part of the video there is footage from the castle demo of the WIZard group at SPU Darwin (actual name of the demo was “Batlord’s Castle”). In there you will also see Kjeld Kirk Kristiansen the owner of the LEGO Group (gentleman in the blue-shirt with tie and the VR headset).

So if you’re in for the short read, watch the vid, follow the links above and check out what you can get out of this today. If you care about background, history and tech-babble … keep on reading 🙂 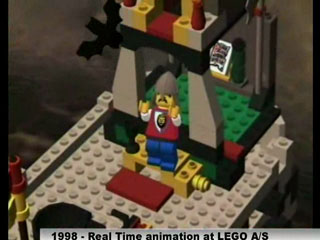 Smart, Scenes and first Evolution
SmartScene evolved out of a two handed interface Dan built for his master thesis. He brought that research to Multigen where he created SmartScene, at LEGO where we had a variation of digital LEGO building systems and SmartScene. An evolution of the original SmartScene is still being offered by Digital ArtForms Inc as a standalone visualization solution.

This is what was in the press release form April 1. 1996 when Multigen received the award from CyberEdge Journal for SmartScene:

“SmartScene is a radical new user interface that eliminates the keyboard, mouse, trackball or any other traditional type of input
device used to build complex 3D models and virtual environments. Instead, SmartScene users simply move their hands…”

I cannot find any better words than those BUT I have never really agreed with the “eliminate the mouse and keyboard” part. Use the motion for fastness and use the mouse for precision. That’s why I asked Dan the first day he started working at LEGO if he could implement SmartScene into PowerAnimator so we could use it to move objects around, manipulate the camera and maybe even record animation.

RealTime Movie Making
The Castle demo you saw in the video was basically a real time movie making system. Long before Polar Express, Beowulf or the newest incarnation of this metaphor used to produce Avatar. The footage here was taken with the SZM (Sende Zentrum München) which was the production house for Pro7 a major TV station in Germany. It was filmed at the same time in Billund and Munich. The castle demo was projected to the kids in Munich and the mix of the kids and the virtual LEGO host was sent to Billund via satellite.

Our system in Billund included a elevated stage, a model of a castle made out of LEGO bricks and a directors seat.

On the stage we had an actor in a magnetic full body motion capture suit. One person was filming the real Castle holding a digital camera but what he saw on his screen already came from the computer.

The director had a bunch of screens in front of him. He was placing LEGO mini figures onto LEGO plates. The mini figures had metal contacts on their feet and connected with the counterpart on the lego plates. This way, depending on which figure he put down, he defined which of the feeds was the active camera.

The directors choice included a view through castle camera, the first person view of the actor in the suit and he could chose from either of 4 cameras in fixed locations distributed around and inside the castle.

The sound effects were created in real time with a Roland Octapad by a foley artist to what he saw and/or following a script. I say that because we used the system with and without scripts. What’s fascinating with this production pipeline is that you can actually use CG to produce art. You can be spontaneous and improvise. If you mention any of those words to your producer these days…

If you want to read more on what the Castle Demo was all about I suggest the comment below this artile. It is written by a fellow co-worker at SPU Darwin and a dear friend of mine Christian Greuel. (NOTE: This is coming from the web archive website. Please be patient, it will load for a while.)

Back to the Beginning…
…of the article 🙂 Because today we can all get that kind of interaction from Xaelander. Be part of the revolution and start to play more at work and do less miles by mouse !!

Geek Alert…
The computers that ran the system at LEGO was a 3 pipe SGI Onyx Reality Monster with InfiniteReality2 graphics , a smaller sgi with console access for the technical director and a PC that transferred the mocap data results to the onyx (if I remember it all correctly).

Notes to the video: I put this video together for Dan as a show-reel in 2003 and a friend of us (Phibe) from Switzerland created the soundz.

LEGAL
begin legal;
! this.site.associated( “The LEGO Group”);
// other than that everybody used to work there
end legal;