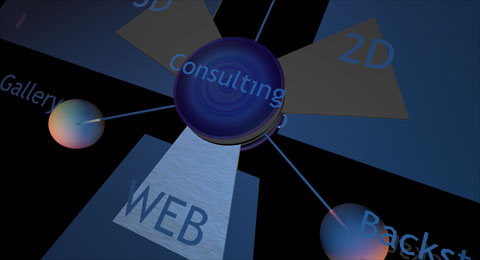 And those more advanced features:

I created this “Space Station”, added links that trigger animations onto the big plates and added links that open web pages by clicking on the 3D text. The entire view can be rotated by 190 degrees and the website has a total different appearance. It’s lit blue from the front and lit red from the back. (blue pill – red pill, anybody 🙂 ). From the get-go the website is vivid because it’s animated. And it’s interactive, the animation can be stopped by pressing onto the green/blue; play/pause sign in the upper middle. In the center of the construct I placed a sound that pans around on your speaker or headphones when you move around in space and the pulsing blue or red waves in the middle is an avi used as a texture.